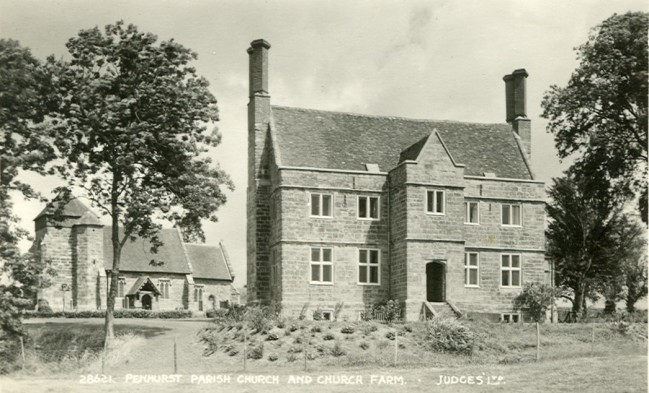 Penhurst is the neighbouring village to Ashburnham and is named from the Saxon for "Pena's wood".

Pre-Saxon activity is evident nearby at Town Creep, a probable Iron Age site. The site comprises earthworks about 250 metres long that may be the lost town of Mercredsburn, which was conquered by the Saxon, Aella, in 491 AD, prior to his sacking of Pevensey.

Penhurst is mentioned in the Domesday book as Penehest and was owned by Osborn for the Count of Eu, the area was half a hide, in which there were two villeins, two ploughs, one acre of meadow and wood for two hogs. It was worth at the time 15 shillings.

Penhurst Manor House was built in 1652 on the site of an earlier medieval mansion. The manor house is now used as a Christian retreat centre.

In 1810 the parishes of Penhurst and Ashburnham were united.

Penhurst Church was built in the 14th century and is dedicated to St Michael the Archangel.

Audrey and, her father, Wilfred Barden

The Ashburnham Archives held at the East Sussex Record Office

The Comprehensive Gazetteer of England and Wales, 1894-5

The Day Sussex Died: A History of Lowther's Lambs to the Boar's Head Massacre - John A. Baines 2012

The Biography of John Nash of Ashburnham born 1800