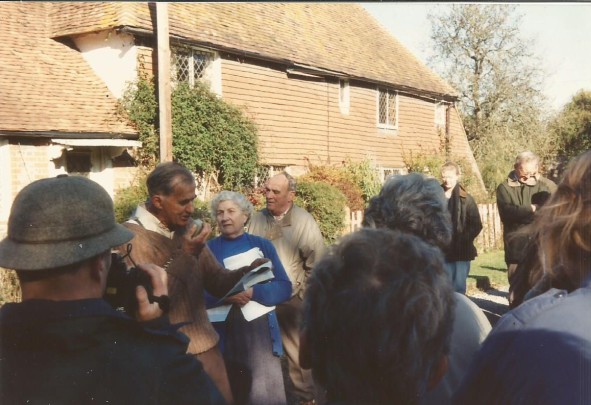 From “More About Ashburnham and Penhurst”

Before my time there was Old Tally – a rough handful and regular poacher. He was never caught because they were afraid to catch him. He used to say he would rather have a good fight than a good dinner, so no-one in the village would tackle him, but a man from Ninfield would sometimes come to the local, hoping for a scrap.

One day old Tally was clipping the hedge in front of his house when the man from Ninfield came along and criticised the way he was doing it, with the inevitable result – a fight. At first old Tally seemed to be getting the best of it, but his opponent said “What little tomtit is that pecking about! I’ll drop alongside of you presently Tally!” And sure enough he did, and knocked him right through the hedge.

Once when the Earl wanted a hare and the gamekeepers couldn’t get him one, he said “Send for Tally, he’ll get me one.”

Old Tally’s son Levi was a typical countryman. He knew many of the birds and their habits. He was quite a hero with me when I was a boy. Once I was working with him in early April, a lovely warm day with our coats off, when a flock of birds went over. “Listen”, he said. After listening he named the birds and said, “We are in for some hard weather when they flock together” I laughed at this as I thought summer had come, but before the week was out it was snowing and very cold, and it lasted over a week. I can’t remember for sure what the birds were. I think they were fieldfares. If he managed to catch an adder he would cut it open, being careful to avoid the poison bag, but would take out a small bladder of oil and keep the oil in a bottle, and occasionally put a drop of it in his ears, as he believed this prevented deafness.

(Editor: I think the people above are Winchesters, based on the rare name ‘Levi’)

A man who was called Jack Risk was the village tramp. As a young man he was quite smart. When he was dressed up for his wedding, his bride to be sent a message saying she had changed her mind and he vowed to never clean up again and he never did.

He kept himself quite decent whilst he had a house. He would sometimes call in and see my mother and father and stay for a cup of tea, but after a time he went to live in Mrs Gates' barn and went from bad to worse. Though he was known to be quite honest, his clothes became so ragged that Mrs Gates told him he was indecent, so he wore a sack back and front of him.

Now Mrs Gates would do almost anything a man would do and she was up a ladder picking pears one day when Jack Risk came along, and as she had a hole in a certain piece of underwear, Jack got his own back and told her she was indecent.

Well shall I tell you a little about witchcraft? My mother and father believed in it, so of course did I at that time, as I heard them talk about quite a lot of incidents, and I will tell you of a few of them that I can remember them talking about.

Another thing if you crossed forks under a chair and a witch sits in it, she cannot get up for a certain time. At Hill Farm a suspect witch used to help with the housework and half a pound of butter was always missing from the dairy when she had gone. So they crossed forks under a cushion in a chair beside the fire and when the suspect witch had her coat on ready to go they said “we have just made a cup of tea. Sit down beside the fire and have one.” Then they made the fire up and she sat there until the butter melted and ran out of her pocket.

A carter was loading his wagon with faggots in Reed Wood one day and the suspect witch was picking up chucks. She said to him “the way you are loading your wagon it will turn over before you are out of the wood.” And you can imagine the man saying to his mate “does she think I don't know how to load up!” But on the way out the horse suddenly darted off, the wheel went up on a stub and the wagon turned over.

If a witch is buried they say her grave will sink in within three days. My father went to the grave of this suspect witch and, sure enough, the grave had sunk in.

I’m writing a few things about the Furnace hoping it may interest someone. I spent my childhood days there and it is still one of my favourite walks up through the Furnace to Blackhurst Pond and on to Bunces or Rocks Farm.

As you walk up the private road toward the Furnace you come to a gate leading into Coach Road Field. Years ago this gate was kept locked and the road known as Dark Lane, probably because of the trees overhanging. It went round the field rather than through it. Only the Earl of Ashburnham’s coach was allowed through it thus its name Coach Road Field.

When you reach the Furnace today it is so peaceful, with only the singing birds and the waterfall to listen to, that it is difficult to believe that it was once a centre of the iron industry. Years ago there must have been quite a lot of noise from the large hammer and the general activity.

There are only five houses there now but my father could remember when there were two more, one in Andersons Wood near Blackhurst Pond and one in what we knew as Jimmy’s garden near the waterfall. When I was a boy there were still two apple trees in what used to be the garden of the house in Anderson Wood and the branches of one hung out over the field. This was a French Coddling and if we picked any of the apples up in the field, well of course, to us they were much better than the ones in our garden. We didn’t go into the wood to get any as we were afraid the gamekeeper might catch us, also my mother told us to never to go in there as she was afraid the well had never been filled in and this would be dangerous once the wooden cover had rotted. There was a very large rhododendron bush in what used to be the garden and every year this was loaded with blossom in spite of being half overhung by trees.

The cottage by the waterfall was obviously part of the furnace workings years ago and what was used as a cellar was probably a wheel pit and a culvert runs from it under, what used to be, our garden to the river down below. As a boy I often thought I would like to crawl up it but I was afraid to do it. We called this Jimmy’s garden as it was the name of the last man to live there. My father was given the use of the garden on the condition he kept it tidy. He certainly did that, also the embankment that held the water to form Furnace pond and the holly hedge on top of this embankment.

There are two large yew trees at the entrance to this garden and another one just outside the back door of the old cottage, it is there because a little girl living there broke a twig from one of the trees and stuck it in the ground and it struck root. Later the little girl died so her parents let the tree grow in memory of her. This garden was an ideal place to play in and I often climbed up into the yew trees to see what kind of birds nests were up there in the branches and it brings back happy memories when I am under them now.

The waterway heading to the old wheel pit was still supplied with running water from what was Furnace pond when I lived there. Along the side of Furnace pond, a tall fence of bundles of gorse was erected for a hide for sportsmen wishing to shoot snipe, as it takes a quick and accurate shot to get one if approached from the open. This pond has now dried up.

All the houses relied on a spring for their drinking water, it was a lovely clear spring with red brick sides and near white sandstone base. Just past this spring is an old boundary stone with APD carved on it, years ago this was the boundary of Ashburnham, Penhurst and Dallington.

The allocation of the gardens was rather unusual, all the ground at the back of the three joined houses went with our house, known now as Bay Cottage. A hedged in square plot and a large orchard across the bridge, over the waterway, went with the other end house and a piece of land, now part of the wood on the right hand side of the road leading to Blackhurst Pond, went with the middle house as well as another piece beside the hill in front. All these boundaries have been altered and more sensibly allocated.

Just along the road leading to Hogstye Wood is an old gravel pit where gravel was dug for the roads of Ashburnham Estate. We passed this on the way to school and had some fun jumping from the bank on to the heap of soft gravel below. It was an ideal place for birds’ nests. Wrens always built under the overhanging ledge of earth and I once found a flycatchers nest, also a kingfishers as it is near the river.

At the side of our pig sties was a very large walnut tree, it didn’t have many nuts but it was ideal for playing under in its shade as there was a stile with a very large footstool just right for sitting on, this stile lead to a raised footpath across the field at the back. This was a public right of way and we used it to go to Barn Chapel when the fields were dry enough. The walnut tree blew down some years back and smashed a garage and damaged a car under it.

Just inside the gate at the bottom of the hill is a large shed known as the Cabbin (?) Lodge. In this shed Mr Harmer, known locally as Arthur Jimmy, was in charge of the Cabbin making. These were small bundles of fire wood for lighting the fires at Ashburnham House.

Along the embankment in Jimmy’s garden was a wide bridge and three flood gates as we called them. These held the water back to form furnace pond, this was the home of many water fowl. These flood gates used to be raised a little to allow water under them if the pond level rose too high during heavy rains. I can remember the night they broke away with a mighty roar and much flooding below.

The old waterway in front of the houses was kept well stocked with fish but of course no one was allowed to catch them. Well I think this is enough to let you know what the Furnace was like 65 years ago, I wonder what it will be like 65 years ahead. 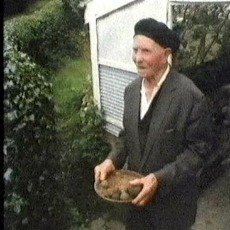